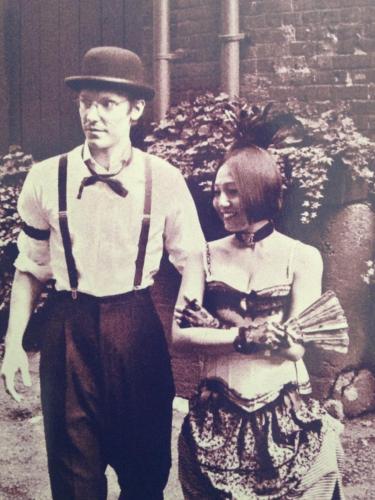 Classic Filigree in a Modern Setting

Laceworks Jewelry represents the creations of Hisako Yamada, a filigree artist working in silver, gold, and precious and semi-precious stones. Hisako‚Äôs filigree expresses figurative forms through use of sweeping curvilinear lines, intricate detail, and imaginative use of negative space. The naturally flowing shapes of her work, at first glance, conjure intricate Art Nouveau and Art Deco imagery from the turn of the 20th century‚Äîhowever upon further inspection, a rich world of minimalism, Japanese aesthetic, and zen-like elegance create a truly unique body of work.

Born and raised in Japan, where more than 100,000 shrines give respect to the natural world, Hisako grew up in Hiroshima, surrounded by a wealth of modern architecture and traditional Japanese places rebuilt after the bombing‚Äîincluding shrines, gardens, and Hiroshima Castle itself. Japan‚Äôs cultural reverence for nature influenced Hisako‚Äôs art from a young age, starting with one of her earliest works, a lily of the valley music box carved in wood for an elementary school class. Nature would continue to inspire her art years later when, while working as a bench jeweler in the United States, she discovered filigree for the first time.

‚ÄúI was drawn to filigree immediately,‚Äù Hisako says, ‚Äúits strength and delicacy‚Ä¶ its intricacy and femininity‚Ä¶‚Äù Hisako found that the pliable yet stubborn aspects of silver and gold wire lent themselves perfectly to creating lace-like, fine-line representations of natural subjects. Yet whereas most modern filigree is made using a wax-mold or a pre-made form, Hisako creates all her pieces freehand, finding the natural shape for each piece of wire, and then soldering them individually to create her designs. ‚ÄúI don‚Äôt force the wire into shape,‚Äù she says, ‚ÄúI let it become what it has inside itself to be.‚Äù

Yet despite her free-flowing approach, Hisako maintains precise control throughout her creation process, working with magnification lenses, fine tipped torches, and nearly microscopic pieces of solder. Applying her background as a bench jeweler, Hisako disguises structural components within her designs, and applies a stunningly meticulous polish to each of her works. The result is handcrafted jewelry that demands a live experience‚Äîit is impossible to perceive the exquisite delicacy of her jewelry by viewing it online or in print.

Most importantly, Hisako‚Äôs process of ‚Äúfinding the line‚Äù respects nature without mimicking it. According to traditional Japanese beliefs, everything has a spirit‚Äîfrom the smallest of butterflies to the largest ocean waves. In this way, Hisako imbues every piece she creates with its own small spirit of nature‚Äîwhich in turn gives respect to the great spirits of nature that everywhere surround us.