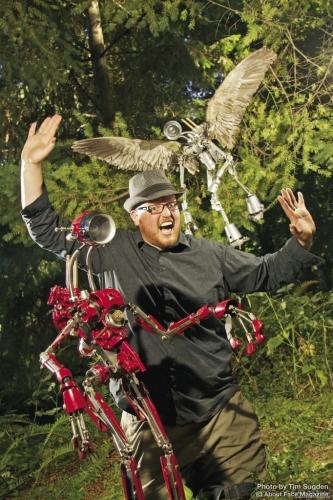 This is Chris posing for About Face magazine with his robots.

Christopher Truax builds sculpture from recycled vintage car parts and scrap metals. He has been creating striking creatures that look as though they might come to life and fly away. His most popular styles of art include robot sculpture and flying clocks. People often say his art is dangerous, beautiful, emotional and life like. “Generally, when people think of art, it's two-dimensional, something you approach on a wall. So when I'm creating these pieces, I'm creating something that is not only three-dimensional, the minute you see it, you get it. You don't have to read something to describe what it is. It's not abstract. We're such a three-dimensional, tangible society— want to touch it, we want to feel it.” —Christopher Truax

He's had much success in Oregon, having shown locally in countless galleries in Oregon since 2006, including posing alongside Salvador Dali originals, “The Spruce Goose” and NASA equipment at the Evergreen Aviation Museum. Nike commissioned the creation of large Goldberg machines for title sequences in the skateboard video, “SB Chronicles” and he has done prop creation for a short film called, “Power Up.” Christopher has also had the opportunity to work on many other films throughout the years. Always moving forward and designing new techniques is a personal goal. Sculptural-wall art is a new element to his work. The use of LCD lights powered by solar cells adds warmth and an emotional connection. Like a magician‚“they don't tell you the trick, or the magic is gone. If I break it down and explain everything, it's not as magical.”