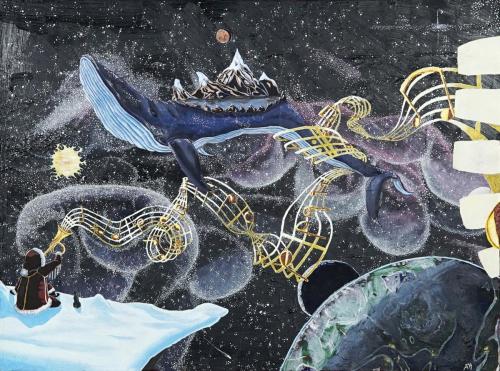 Pursuant of the truth that resides in the 'in between'.

Adam Hesse began pursuing painting in earnest while in college in 1997 at Ball State University in Muncie, Indiana. He majored in Biology and French while serving in the Marine reserves, but has always endeavored to pursue and develop his art as the singularity between the rational and the irrational; as an aid in peeking behind the veil. An avid cyclist, hiker, and outdoorsmen, He traveled extensively and lived in Corfu, Greece where he was commissioned to paint ‚ÄúThe Creation of the Sun and the Moon‚Äù by Michealangelo (Sistine Chapel). He then painted other commissions in Greece, Sweden, and the United States. After completing a BS in Biology with a minor in Chemistry and a BA in French linguistics he did his post graduate studies in marine science at the University of Otago in Dunedin, New Zealand in 2011. A member of the Royal New Zealand Society of Science and a key-note speaker at the Pacific Voices Conference, he then returned to the U.S. where he met his life partner which brought a baby and the motivation to find a place in the world where he could explore the synergies between art and science. He has long said ‚Äúwhere the mountains meet the sea is where you‚Äôll find me.‚Äù